On the basis of the available historical information, the area surrounding the resorvoir of Collalto was regarded as of moderate seismological importance in the past. However, its seismogenic potential significantly increased by the literature appeared in the last decade. Arguments for or against the existence of structures capable of generating strong earthquakes (M ≥ 6.0) in this area are currently object of scientific debate and cannot be considered definitely resolved, given the partial inadequacy of available information, and the poor and sometimes controversial experimental evidences. Similarly, studies on induced seismicity phenomena concern mainly the experience gained for large dam reservoirs or mineral and oil extraction. The seismic monitoring for gas storage activity displays several innovative features, from both technological and scientific point of view.

The Seismic Network of Collalto has been designed with the aim of monitoring and studying both the micro-seismicity induced by the storage activity on the natural reservoir and the natural seismicity in the area surrounding the reservoir itself. The network combines instrumental characteristics of high dynamic range, tailored to ensuring the registration of medium-strong earthquakes, and high sensitivity, required by micro-seismic monitoring in order to provide the enough resolving power at depth and along the permeable layers of the natural reservoir. The network geometry has the highest density in the area corresponding to the reservoir, where the spacing between stations is about 4-5 km, and it extends gradually away from it, so as to integrate harmoniously the regional seismic networks operated by OGS. The network is equipped with a number of stations which preserves the monitoring capability also in the case of temporary malfunctioning of the instrumentation or communication. The network has been designed to allow the detection of weak events (M ≺ 1.0, or even possibly less) occurring within or close to the reservoir, and the full record of medium-strong events (M ≥ 4.5) occurring throughout the study area. It will provide the high quality data needed to perform precise locations and magnitude estimates, studies of seismic sources in order to relate the release of energy with the state of pressure inside the reservoir, tomographic analysis to define seismic wave velocity of the underground structures, time variation of the local elastic parameters and their possible relationship with the seismic activity of the neighboring seismogenic structures.

The Collalto Seismic Network fits into the broader context of seismic monitoring conducted by the National Institute of Oceanography and Experimental Geophysics (OGS) through its Department for Seismological Research Center (CRS) since 1977, year of installation of the first group of seismic stations in the North-East Italy, following the 1976 Friuli events. Today this activity is done in order to study the regional seismicity and for seismic alarm purposes through special agreements with the Autonomous Region of Friuli Venezia Giulia, the Veneto Region and the Autonomous Province of Trento, via the Civil Protection services, as well as through scientific and technological collaborations with the National Institute of Geophysics and Volcanology, but also with other research and academic institutions, both Italian and international. The network has been designed for perfect integration in such a context so as to benefit from data acquired from neighboring networks and to return robust and valid informations as much detailed as possible. From a general point of view, the study area presents a series of difficulties linked essentially to the high level of human activities, which involves a strong background noise, and to the presence of soft fluvio-glacial soils at the edge of the Venetian Plain and at North of the heights of Collalto, not suitable to the installation of seismic sensors (Figures 1a and 1b). 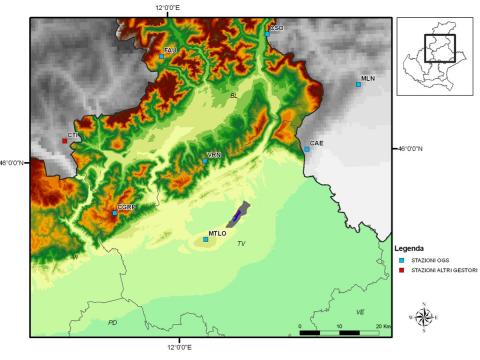 Figure 1a – Simplified geographical map of the area in which the natural reservoir of Collalto is located. 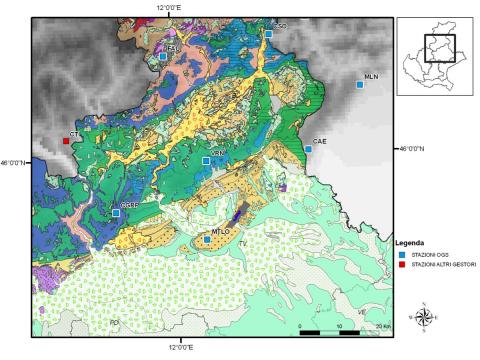 The Susegana/Collalto and eastern Montello areas, surrounding the reservoir managed by Edison, are characterized by a hilly morphology, which is the first expression of the southern alpine relief. They mainly consist of formations such as the Villafranchian conglomerates, characterized by a good degree of cementation, and the more recent fluvio-glacial deposits, generally outcropping in the valley bottom or at lower altitudes. The land use is predominantly agricoltural and forestry, and only poorly affected by urban development, except that along the valley bottoms, where the main thoroughfares run. The characteristics of the hilly areas, therefore are generally well suited for installation of seismometers, while the whole Venetian plain at south-east of the Montello mountains and Susegana/Collalto area, resulting in highly populated and industrialized, limits the possibility of intervention. The same applies to areas at North of the Montello/Collalto heights, where the widespread presence of urban settlements (Moriago, Sernaglia, Falze, Pieve di Soligo) and of industries, in addition to the soil characteristics, make not feasible the sensors installation. The area of the Collalto reservoir (Fig. 2) has dimensions of about 10 km x 3 km, and contains 24 wells concentrated in a dozen of fields. Only a part of the wells is actually used for the storage/extraction of methane. The most productive area, as regards the introduction/extraction of methane, has a smaller size, approximately of 5 km x 2 km. The production levels of the reservoir are located at depth of about 1500-1600 m. 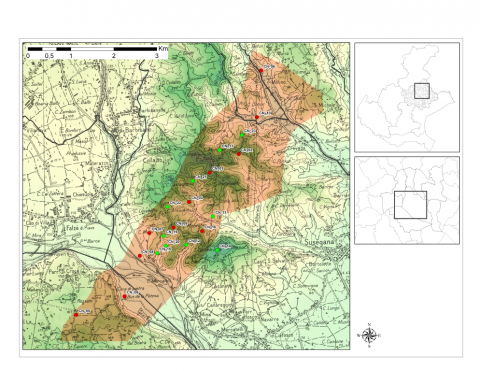 Figure 2 – Detail of the area of the Collalto Storage Plant, with the location of the reservoir (brownish area) and the wells (red and green dots).