Hardware
The main acquisition system dedicated to the Edison project is installed at CRS Department. Its hardware consists of an Apple Mac Pro Server (Figure 1a), with the following technical features:

The internal memory of server for local archiving is used as local buffer memory for the acquisition system. Data are acquired in real-time and daily stored on the OASIS archive, which is an external structure very solid (http://oasis.crs.inogs.it).
A secondary acquisition system has been also installed at the OGS seat of Trieste, not only for redundancy purposes, but also for taking advantage from an Internet access point separate from that one of the OGS seat of Udine. The secondary system has a copy of the acquisition software, of the processing software, and of data on the buffer memory.
The technical features of its hardware are:

Once acquired, raw data from monitoring stations are first converted in miniseed format, and then processed and analysed. Every day, the converted data are permanently archived in the central infrastructure of the Department used for accessing and archiving waveforms. By this way, the data are permanently and securely stored, as well as made available on the web. This archiving system, called OASIS (http://oasis.crs.inogs.it/), is a permanent structure of CRS Department of OGS. It consists of two parts, one for managing the system and the other one for data archiving (Figure 2), both of which installed in the two OGS seats of Trieste and Udine.

The archiving component is based on the tray storage system Sun-Oracle Storagetek 6140, characterized by disk arrays in Raid6 configuration. It guarantees both safety and performances, and it is able to store about 10 TB of real data, without redundancy and filesystem overhead. In order to archive data from the Collalto Seismic Network, the OASIS system has been supplemented with another disk array, reaching its maximum capacity. The quantity of data produced yearly by this local network is around 500 GB and therefore the section of OASIS reserved to it will be enough to archive data until 4-5 years.

Figure 2 – (a) Management and (b) archive components of the OASIS server of OGS.

Software
Now, let’s describe the configuration of the acquisition system. Stations are set for recording continuous data in the Guralp proprietary format GCF (Guralp Compress Format) and for simultaneously writing them in MiniSEED format. SEED and MiniSEED are international standard data formats developed for the United State Geological Survey (USGS) and used by the International Federation of Digital Seismograph Networks (FDSN) for data exchange. The SEED format contains info about the seismic station and its equipment, instrumental response included. MiniSEED is a format more compress than the SEED one, and it contains only waveform data. It is very useful for storing large amounts of continuous data.

Data-loggers have been set to sample the seismic signal at 200 Hz. Such a frequency is thought adequate in monitoring both natural and induced seismicity. Note that generally the seismological networks have a sampling rate of 100 Hz.

The server of Collalto Seismic Network is a computer able to manage both acquisition and preliminary processing of data in real-time. For transmission and data archiving in real-time the SeedLink protocol is used. It allows establishing a strong communication between the acquisition server and stations. The core of the system is a virtual server called Ring Server (Figure 3), which lets to put arriving data in a circular memory (ring buffer), to retrieve and correct any missing data, other than to check quickness and exactness of communication between server and clients. Once entered in the ring buffer and validated, data are archived on the hard disk of the server as files MiniSEED of a preferred dimension (for example of daily length).

The software used for processing the seismological data is EarthWorm. It is open source and is organized in a set of modules which manage all functions needed to process data acquired by a seismic network. The slink2EW module connects the Ring Server and EarthWorm. A sketch of the whole system and the functions of EarthWorm are represented in Figure 4. 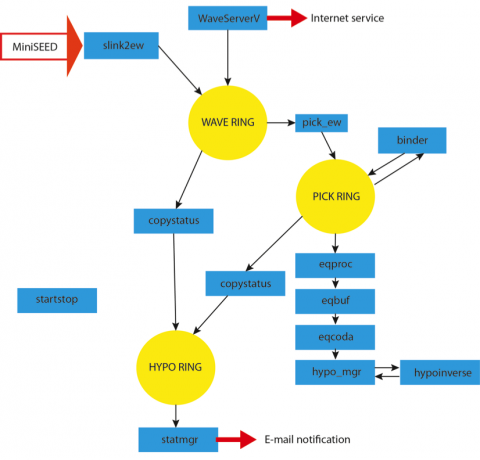 Several steps of the processing, both in real-time and off-line, are made by EarthWorm. At the moment, some functionalities both for processing and for displaying the acquired data are under development and they will continue to be so at least for the first year of management. Some examples of the basic functionalities already developed will be shown in the following.
Figure 4 shows the instrumental response of the broad-band seismometer installed at station ED06. The response is defined in the frequency domain and it is fundamental to evaluate the actual ground motion when the signal recorded by the instrument is available. 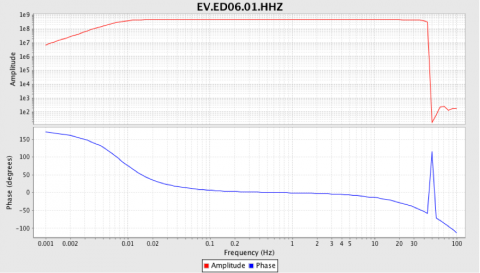 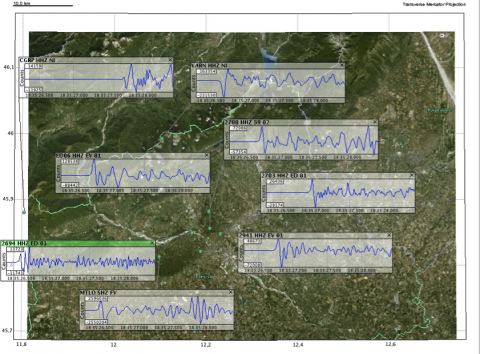 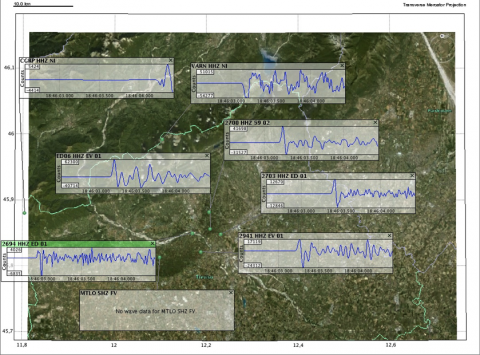